Julie Corbett wasn’t the sole parent facing a serious challenge when her children’s Berkeley, California, elementary school instituted a zero-waste lunch program more than a decade ago. But you can be darn sure that she’s the only one who went on to establish the country’s most environmentally aware packaging company. After recognizing the lack of truly low-impact containers at the grocery store, and doing a ton of research on recycling practices, Corbett launched Ecologic in 2008. And last year, her Manteca, California, plant began turning out the first shower-stable, biodegradable bottle ever made, for a new personal-care brand named—you guessed it—Seed Phytonutrients. The mother of two recently sat down with us to reveal how she morphed from an investment banker into a fierce, eco-activist executive. 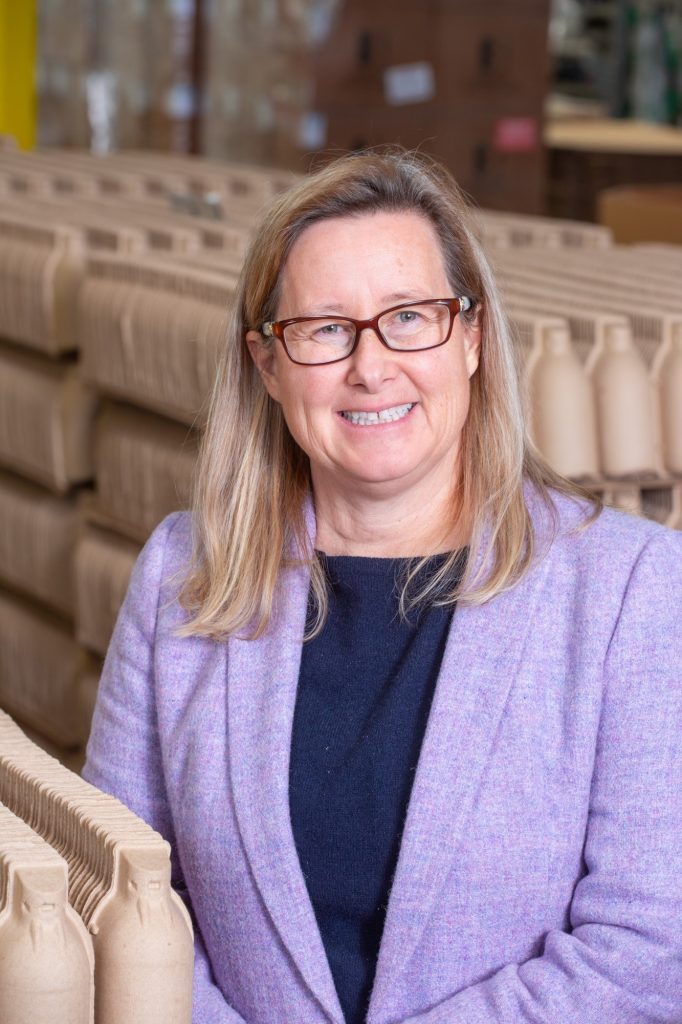 SEED PHYTONUTRIENTS: How does someone with a background in finance suddenly decide to pivot and go into package manufacturing?

JULIE CORBETT: My kids’ school started a waste-free lunch program, which was transformational for me. I had to examine my choices, to look into what’s really recyclable. You’d think juice boxes would be better than plastic bottles, but those paper boxes are coated with aluminum, and multi-material structures are harder to recycle. You can buy the large bulk container and pour individual servings into a canteen or thermos. It’s better, but you’re still creating waste. You haven’t eliminated that step.

And I found that step almost impossible to eliminate. I’ve been a conscious consumer for a long time, and I’ve seen choices explode in almost every dimension of my life. I didn’t have to buy a t-shirt made in China; I could pay more for an American-made one. I was able to choose between organic and non-organic food, yet not the container it came in. As I’m walking down the grocery store aisles, trying so hard to make a difference, I was shocked that I didn’t have much of a choice in terms of packaging. After doing some research, I learned that Method and Seventh Generation used recycled plastics, but oh my goodness, does the layman consumer have to work hard to figure this out!

SEED: So that’s it? As zero-waste school lunch program led to this massive mid-career switch?

JULIE: It was a start. The real epiphany came when the investment company I worked for began looking at buying the stock of an established beverage company. The company had saturated the storefront market and was planning to move into the ready-to-drink wholesale market, at a volume of 6 to 8 million units the first year. That seemed like a massive number to me. Does the world need 6 million more plastic bottles polluting it?! Then I realized 6 million is a drop in the bucket, basically a rounding error, in the beverage category. No wonder we have such a waste problem!

Around the same time, I ordered my first iPhone, and it came in this paper tray that was molded like plastic. That’s when I thought: If it’s possible to shape paper now, why isn’t a packaging company seizing the opportunity to make products that are less impactful on the planet?

SEED: Dumb question, but why is paper so much better than plastic? I mean, we put both in our recycling bins.

JULIE: The stuff in your bin goes to what we call recycling facilities, but all they really do is sort the materials and try to sell them. In America, the big paper companies purchase a lot of that waste paper and turn it back into paper, tissue, and cardboard. It’s a similar story for glass and aluminum. Unfortunately, the polymer chemical companies that make plastic aren’t active in the after-markets for the post-consumer product. Polymers are complicated, chemically, while paper is a natural fiber-based material that’s relatively easy and cost-effective to break down and recycle over and over again.

Plus, political and consumer pressure transformed the paper industry in the 1970s. It stopped clear cutting forests and began farming trees. Most paper mills are hydro-powered now and don’t emit as much carbon. Once I saw and touched that paper iPhone tray, a lightbulb went off: Maybe I can shape paper into a bottle. I knew that I couldn’t coat the paper to make it watertight, as that would change the value proposition in the recycling process, so I decided on a thin plastic insert that would call for far less plastic than an entire bottle would. And because the two materials would be separate, and not amalgamated, both components could be re-recycled. I started reaching out to packaging companies with this idea.

SEED: And how did that go over?

JULIE: Ha! Nobody in the packaging world even wanted to talk to me. It’s an old, rust-belt kind of industry. I live in the Bay Area, a place that’s seen unimaginable innovation. Many of the companies here have been founded by young outsiders with innovative, energetic mindsets. That’s not the case in packaging.

SEED: Surely, things were different once you raised capital and launched Ecologic…

Julie: There were definitely times that I felt marginalized within my own company. We needed seasoned manufacturing pros, so I still encountered that whole “I come from the industry and you don’t, so I know more than you” way of thinking. And though I may not be a trained engineer, having an outsider’s perspective gave me an advantage in terms of understanding the consumer and the environmental impacts. I also gave birth to the Ecologic bottle, so I have an intuitive sense of its weaknesses. And I’ve interacted with it so much. At the beginning, my children and I probably assembled 10,000 bottles in our dining room and garage. I care greatly about how the consumer uses that bottle. As I result, I usually spot problems before anybody else. And my ability to see those pimples can be misread as negativity. But guess what? When a company succeeds, it’s often because someone there really, really cares. It’s not a job; it’s a passion.

SEED: Do you consider your company a success now?

JULIE: Things have been moving in the right direction over the past few years, as the market is finally catching on to the problems I grappled with a decade ago. And we’ve been able to attract great partners, first Seventh Generation and more recently Seed Phytonutrients. Unlike old-school packaging companies, Ecologic is flexible, collaborative, and open to new ideas.

That’s how we’re going to continue to grow, by partnering with companies who share our principles and push us in new directions. The Seed team cares the way we care. They worked with us to create the first shower-stable, biodegradable paper bottle. And because of the way that bottle comes apart, it can ship nested, requiring less truck space and, thus fewer carbon emissions. Seed and Ecologic have already produced 400,000 bottles, which means that, together, we’ve diverted 10.4 tons of plastic from landfills. I’d call that a success.

SEED: What should the rest of us be doing to safeguard our environment?

JULIE: Try to become more conscious of what you buy and discard on a daily basis, as well as what sort of value those objects have at the end of their life. Are they truly recyclable in your community? Don’t place materials in your recycling bin that don’t belong there. It’ll contaminate the recycling stream and make it hard to recycle the materials that can be recycled. Give up the bottled water and buy a refillable Klean Kanteen. Take your own mug to Starbucks. These are simple, minorly inconvenient things that would have a major impact if enough people did them.